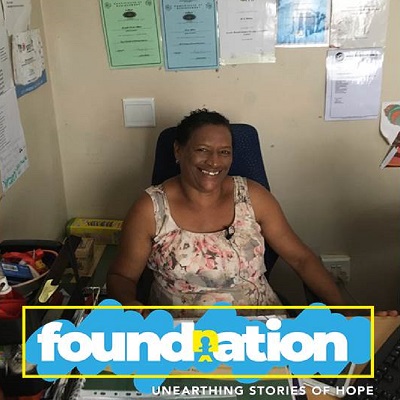 This was quite a unique interview because it is one of the rare ones where I didn’t go it alone. Because I’d never been to Cato Manor before I asked around work to find out whether people thought it was a safe place, and my queries were met with a rather unanimous “no”. So I asked one of my friends to accompany me this time, and he kindly drove both of us there in his Land Rover (which probably cuts a significantly more imposing figure than my little Chevy Spark).

I first heard about Lizzie Mkhize from a friend. She mentioned that she may know some people I could talk after I told her that I’m starting this podcast. My friend told me that Lizzie runs an AIDS centre from her home, and that she receives no funding for it. She also shared our contact details with one another. I hadn’t quite gotten around to properly reading the messages yet (it was one of those crazy Sundays where I was seeing people and driving all over the place) when I started to see missed calls on my phone.

I realised that it was Lizzie who was trying to contact me, clearly eager to get the ball rolling and set up an interview. I was thrilled that she was keen to meet up. I suppose if you don’t get much in the way of funding every chance to tell your story and get it out there is taken seriously! I phoned her back as soon as I was out of the car. Lizzie was a friendly and very enthusiastic lady. She told me how excited she was to meet me and tell her story, and we pretty much set a date to meet up right after that first conversation.

This wouldn’t be the first time Lizzie received coverage though. Masimbasane had been featured on SAPA TV on Facebook before (which my friend mentioned in her initial message). Research is obviously quite an important part of my process, I like to feel a bit more equipped to ask the right questions after hearing or reading more about the person in question. After scrolling through their timeline for quite some time though, I was unable to find the post dedicated to Lizzie’s work. She kindly shared it with me though, and you can watch it here.

Anyway as Gareth and I parked outside Lizzie’s door on a rainy Sunday afternoon, her husband John opened the gate for us pretty much as soon as we arrived. They welcomed us with open arms (literally, Lizzie enveloped me in a hug right away). She showed us around her home, turning their happy music down so we could speak comfortably.

Lizzie took us to the testing room where various educational posters have been put up and where patients receive their medical check-ups. She showed us the area where she runs her afternoon literacy programme, helping children who struggle to learn in the English language. She showed us her office, and her kitchen. This all took about five minutes because Lizzie runs this centre from her own home.

It didn’t take much prompting for Lizzie to start telling us more about the work she does and how she got started doing it. After my first, and rather clumsy, question she started sharing her background and how she got to be where she is today. In the SAPA TV insert I’d learned that Lizzie had had an abusive husband in the past, and that she had contracted HIV from him. Sitting across from her and doing this interview I would honestly never have said that she’s ill. Or that she’s 55 years old! She just laughed when I complimented her on how good she looks.

What became clear to me throughout the conversation is that Lizzie is a very people-centred person. She never seems to think of herself or of what she can get out of someone or something. She rather thinks of others and what they are going through…and how she could practically help them. On the sign outside their house it states that Masibambisane is open 24 hours a day.

And that’s clearly the truth. Earlier in the week Lizzie had sent some photos of a little baby that the police had dropped off with her for the night. She answered a knock on her gate at one in the morning, taking in this defenseless little one. Lizzie fed her and looked after her for the time the police had needed her help.

During our time at Masibambisane one of Lizzie’s patients also stopped by to collect medication. Herself and John sprung into action, they worked together to take the patient’s blood pressure and get all the paper work done before handing out the actual medicine.

Lizzie’s role is basically to act kind of like a “middle man” between the community and the clinic. Normally people would have to go and sit in a long queue to collect their prescriptions. However sometimes that becomes difficult when a patient has a job…because as Lizzie explained you sit in the same queue whether you are collecting your ARVs, or whether you are there to see a medical professional for literally any other reason. This can mean hours of waiting, and because you’re not allowed to default on your medication you can’t forego collecting it. This is where Lizzie comes in!

People who live in her area and have proven themselves to be trustworthy by taking their medicine faithfully for a year are given the opportunity to visit Lizzie’s home to pick up their meds. Here the queues aren’t nearly as long, partly because she’s a practical woman who allows unemployed or retired people to pick up during the day, while working people are encouraged to visit the centre after hours. And partly because they don’t receive the volume of patients the clinic would.

The process is very well documented and controlled, as we saw when they were busy assisting their patient (or client as they call the people who visit them). Each patient has to signed to say he/she received their medication and if they don’t collect the meds it gets sent back to the clinic. The different patients are also grouped together in “clubs” that have the same collection times so that they’re easier to keep track of.

As we chatted Lizzie shared with us some of her struggles after moving to Cato Manor. She laughed out loud when I told her that I was surprised to meet a coloured Mkhize. But she mentioned that it had been a bit of a struggle winning the community’s trust because she looks different to pretty much everyone else in the area. However, she’s clearly won them over judging by the amount of people she helps…And Lizzie is always willing to help, no matter the time, and no matter what they’ve said about her in the past.

So, there were a few things that I found absolutely incredible about Lizzie Mkhize.

First of all, she did not let her previous relationship turn her into a victim.

Secondly, she didn’t (and still doesn’t) see HIV/AIDS as a death sentence. When she was diagnosed in 2006 she decided that she would fight the disease. And honestly she looks super healthy.

She’s also refused to let the fact that she lives with the virus define her in any way. Well, other than as a survivor. Lizzie shares her status, and her story, with the world so that she can show others that it is possible to live a full and meaningful life with this disease.

She is not afraid of obstacles. Man, to start a centre in your own home, and to be on call 24 hours a day. That’s not for everyone…

She didn’t let anything, including a lack of resources stop her. Lizzie mentioned that she had received a donation from one couple who helped extend her home by adding a stoep area. Outside of that she does not receive much support, but Lizzie just soldiers on.

My friend and I drove away from that meeting feeling deeply affected. It was truly humbling. I was glad I had someone to share that feeling with for once. And even though we only visited her for a short time Lizzie keeps popping into my mind, she keeps challenging me by how much she is achieving with so little available to help her.