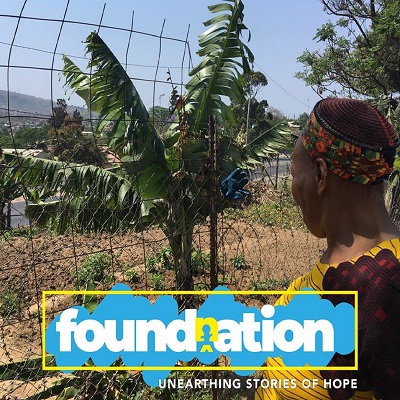 When I set off to visit this NPO I wasn’t too nervous. I’d actually encountered them once before thanks to a Mandela Day initiative I was a part of so I had an idea of where the centre was situated – on the main road that runs through Inanda Township. The first time I’d dealt with the centre, and its staff, I’d been profoundly affected. It had been one of those horrible admin days that only us South Africans understand – where you go to some government department (in my case the traffic department) and end up being sent to get different documentation off-site four times! By the time I finally made it to the centre I was in a fouler than foul mood. However meeting everyone at Sizimiselse changed my entire day.

There was such a positive feeling amongst everyone there, this despite what was obviously very tough circumstances. They were stoked to receive the support given by the company I work for, and their obvious joy made my day. Plus when I started to hear more about their history and what they currently do…well, let’s just say my frustrations were long forgotten. They truly support their community – everyone, from the youngsters to the elderly, sick and infirm. They even had an entrepreneurial arm.

Anyway, when I decided to feature an NPO that helps people with health concerns I immediately thought of Sizimisele and Maggie Dhladhla – the founder. I phoned her and she gave me some directions that I pretended to understand – “Ohglange High School” sure I know where that is…I made notes of what she said anyway and started driving towards the school. The centre itself couldn’t be found on Google maps. On the way there I started feeling confused – it wasn’t quite the route I remembered. I made one small wrong turn but then managed to get back on track and was relieved when I saw their signage up ahead.

Maggie was already on site waiting for me. Our introductions were made rather quickly before she took me through to her office to go tell me more about their story. She was dressed in her traditional outfit as she’d left her church meeting early to come and show me around. She looked just beautiful in hues of yellow and with beads around her ankles too!

Once we were in the office Maggie launched into the story straight away. She has a lot of different posters on her walls showing various part of Sizimisele’s history but she positioned herself in front of her organogram. It showed an outline of how they started but also how they’ve grown and developed, and explains how they function. Maggie didn’t need much encouragement. There is a saying in Afrikaans “Wat die hart van vol is loop die mond van oor” which roughly translates to “What the heart is full of the mouth runs over about”. It was true in this case – she clearly spoke from the heart. And I was loving every minute of it!

There is a weird correlation between myself and Sizimisele. One of their most significant anniversaries falls on my birthday! On the 4th of August 1987 they moved into the building where they still are today. I must say it gave me a warm feeling to know that!

After Maggie completed her studies and before she found work as a teacher she started caring for children within her own community in Inanda. She had studied the Montessori method and was meant to start with a small group of children – around five. However after she put up posters in the area advertising that she would look after young children while their parents work she had 20 students.

The great thing about Maggie is that she made it work. She adapted. I can’t quite describe what it’s like listening to someone like her. She is a charming, confident speaker. She also knows her stuff and values the act of remembering. There are posters from many different events and donations on her wall because she believes it’s important to remember and to know who has supported you. No wonder she knows so much information offhand. And also no wonder that it’s clear that many people and organisations have come back to Sizimisele time and time again. The need is great yes, but it’s obvious that something is being done about it.

I spent just over one hour with Maggie. She shows me the amazing beadwork and grasswork done by the people in her community. She shows me the showroom where they sell these beautiful items (and I’m honestly not being nice by saying that, they are really intricate beautiful pieces of work). There is also a sewing room where seamstresses design and create traditional outfits for people within the community. My favourite thing about the tour is when she tells me about the gardens.  There are some fruit trees and a vegetable garden that were planted by the elders within the community. These food items are used to prepare meals for the young ones.

She was also clearly bursting with pride when she shows me the immaculate library area. It’s obviously cared for very well and appreciated. It quickly became clear to me why this is one of her particular points of pride. Maggie’s daughter donated it to the centre. She raised a beautiful young woman who has a successful career and lives in Johannesburg. For me personally the best part about this is that her daughter grew up in this environment, and that she clearly continues to support Maggie’s amazing work. It’s obvious that Maggie is immensely proud of her. It’s also obvious that Maggie’s life is here at Sizimisele.

On top of all of this there are Community Caregivers (CCGs as Maggie calls them) that do home visits for those who are too infirm to visit the clinic and collect their medicines. These CCGs visit people within their homes and bring them their essential medicines. They also assist people with getting ID documents and grants sorted out by acting as a bridge between the community and the ward officials.

When I asked her about rest she told me that she does make time for herself on Sundays. She doesn’t labour alone at Sizimisele, the community supports her work. They get involved and each project has its own committee that runs it so it doesn’t all rest solely on her shoulders. I just love this. I love that Maggie has the support of those around her and that her life has taken a drastically different path to what she thought it would take. During our conversation she mentioned that she never expected to be doing any of these things. The people of Inanda have helped shape her life’s path. They communicate their needs and they ask for help. Maggie may spearhead some of the ideas, but they work alongside her to make it happen.

At 75 years of age this incredible woman shows no sign of slowing down. Just before I left as she greeted me she actually said that I made her day by coming to meet with her and hear her story. That just blew me away. First of all this was a Saturday (a Sabbath for Maggie) which meant she had to disrupt her regular routine to accommodate my schedule! Instead of complaining about it, or making me feel guilty for asking her to give time to myself and Sizimisele when she had already had other plans she was grateful. I drove away feeling incredibly uplifted by the spirit of the place, the stories I’d heard. If only we all took such an interest in our community what would South Africa actually look like?

The lasting impression that stays with me after meeting Maggie Dhladhla is that she actually cares about others. During our conversation she described being at home in the evenings and watching TV while constantly thinking of new ways to help the community. It’s clear that this job is her passion…and when I asked her about retirement she explained that she couldn’t retire, that sitting around being idle would just frustrate her so it isn’t an option.

Maggie is old school so if you would like to get in touch with her you might just have to take a drive to Inanda on any weekday. Or else just give her a call on 072 722 1062.

Post Views: 706
Tags:charityCommunityCommunity CaregiversDevelopmentEarly Childhood DevelopmentEntrepreneurial programmeGrowthMedical carenon-profit organisationNPOYouth
Manage Cookie Consent
To provide the best experiences, we use technologies like cookies to store and/or access device information. Consenting to these technologies will allow us to process data such as browsing behaviour or unique IDs on this site. Not consenting or withdrawing consent, may adversely affect certain features and functions.
Manage options Manage services Manage vendors Read more about these purposes
View preferences
{title} {title} {title}